The economies of China and Hong Kong are bouncing back following the impact of the COVID-19 pandemic.

“Compared with the developed economies, China has much more momentum,” says John Yuan, head of China and Southeast Asia at iDeals Solutions Group. “The country’s GDP growth rate is much higher. At the same time the renminbi is in a relatively strong position, which is motivating companies to go out and buy high-quality targets.”

This improving economic outlook is translating into greater deal activity. Together, China and Hong Kong recorded 963 deal announcements worth US$296.4bn in H1 2021, representing a 88.5% year-on-year increase from the same period last year, and with 148 more deals recorded.

Domestic activity was strong in H1, as Chinese and Hong Kongese companies looked inward to take advantage of local opportunities. All but one of the ten largest deals were intranational, including the mammoth US$111.5bn merger between Chinese infrastructure companies Sichuan Railway Investment Group and Sichuan Transportation Investment Group – the largest deal of the year by far. 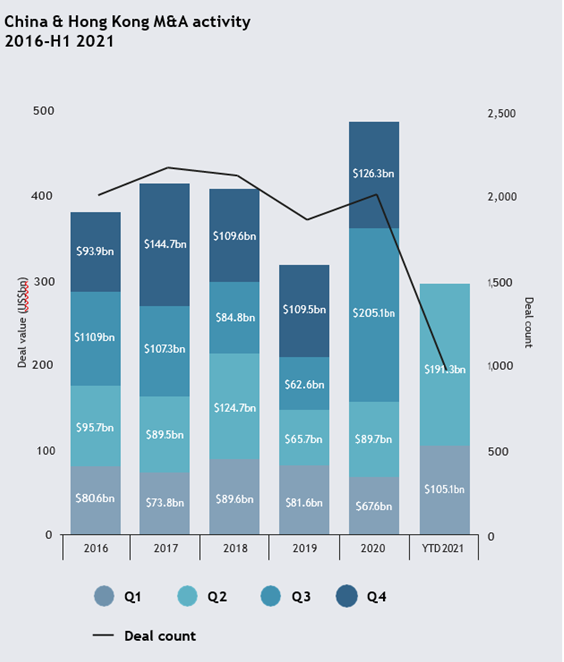 As a result of such mega-mergers, regional domestic deal value looks on track to set a new benchmark, having already totalled US$276.4bn in H1 on 873 deal announcements, almost double the aggregate value of the 732 domestic transactions logged during the same period last year.

“The amount of domestic M&A activity has increased significantly. There are a few major drivers, including, on a global scale, inflation and the depreciation of the dollar, as well as, here in Asia-Pacific, the presence of strong state and government investment support,” reports Yuan.

US buyers flock to China

International appetite for Chinese and Hong Kongese assets remained high in H1 2021, particularly in respect of US buyers. A total of just under US$20bn-worth of inbound deals were recorded, on 90 transactions, roughly on par with H1 2020.

The largest inbound deal of H1 was Blackstone’s US$5.7bn acquisition of a majority stake in real estate firm SOHO China, a developer of office buildings. Blackstone is said to be confident about China’s long-term economic prospects and the potential of the office market in Beijing and Shanghai.

Inbound dealmaking targeting the Hong Kong market was also pronounced in the first half of the year. Hong Kongese assets are attracting attention across Europe, particularly Austria and France.

One significant deal carried out by a European bidder was French utility Suez’s acquisition of the remaining 42% stake in Suez NWS – its China-focused wastewater treatment services provider – for US$538m. The deal makes clear the French utility firm’s ambitions to expand its operations within the region.

Dealmakers in both China and Hong Kong remained active in the technology sector in H1. There was a total of 119 deals worth US$45.7bn in aggregate (15.4% across all industries, second only to construction’s massive 44.3% share of proceedings in H1) targeting tech firms in the region, representing a year-on-year increase of 59.2% in value terms on 23 more deals.

"China’s M&Aa market will continue to grow steadily in terms of transaction volume and value, and I think TMT will continue to stay at the centre of that activity,” says Yuan. “Internet companies will acquire high-quality overseas targets and look for new cross-regional business growth opportunities.”

Hong Kong also saw its fair share of tech dealmaking, exemplified by the US$4.4bn take-private of e-commerce platform China Youzan by a consortium led by the company’s CEO and founder, Zhu Ning, which reflects e-commerce’s growing prominence in Asia.

China buyouts on the rise

“People are trying to identify the most attractive subsectors for PE investment, based on changing consumer behaviours,” says Yuan. “We can see that they are most interested in digital healthcare, e-commerce and e-learning. There are signs, too, that projects related to carbon neutrality are also coming towards centre stage.”

The surge in domestic dealmaking in both China and Hong Kong witnessed in H1 implies an inward focus amid an uncertain global economic outlook. This looks set to continue through H2 2021, as local firms – particularly large state-owned enterprises – continue to look for opportunities to consolidate.

China and Hong Kong remains a draw for international investors, with corporates and PE houses alike securing deals in the first half of the year. The high-growth tech sector will continue to attract investment as international firms look to gain a foothold in the burgeoning Asian market.