The pandemic dealt a swift and sharp blow to the UK economy, with GDP falling 9.9% compared with 2019. Yet, despite considerable headwinds, UK M&A activity held up impressively in 2020, posting the second highest aggregate annual value since 2006.

The UK economy is geared for a swift recovery, with the Organisation for Economic Co- operation and Development predicting growth of 7.2% in 2021, the highest figure since 1941. Against this positive backdrop, and as the end of lockdown comes into view, confidence within the UK’s M&A market is on the rise. A total of £132.9bn changed hands in H1 2021 – a 77% year-on-year increase. Deal volume, meanwhile, rose by 74% over the same period.

A revival among overseas dealmakers targeting UK assets drove activity throughout the first half of the year. A total of 417 inbound deals worth £103bn were recorded, more than three times H1 2020’s deal value of £29.7bn, while accounting for 173 more transactions.

“Mid-size UK corporates have always been an attractive market for inbound investments,” says Berna Albay, head of UK virtual data room sales at Admincontrol. “Foreign buyers have seized the opportunity to pick up some bargains.”

US bidders were a major driver, conducting five of the eight largest UK deals in H1. The biggest of these was the £7bn merger between FinTech Acquisition Corp V, a special purpose acquisition company (SPAC), and online broker eToro. 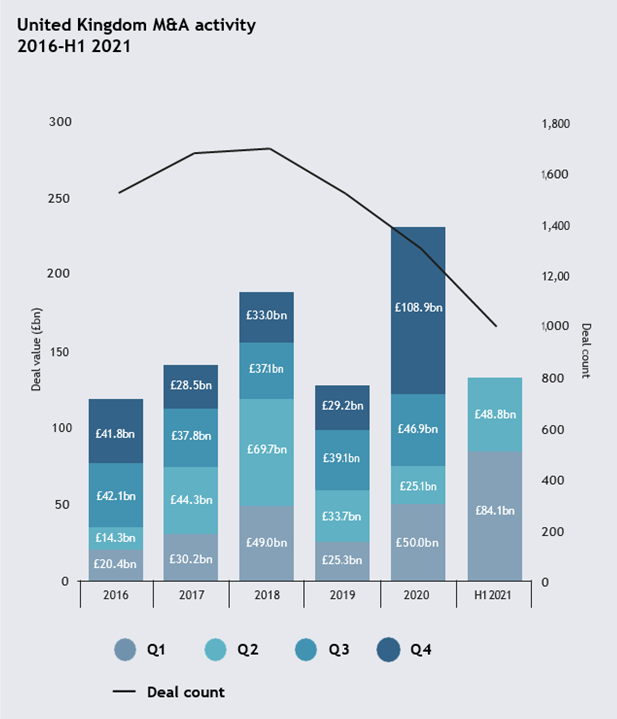 The deal reflects the increasing presence of SPACs in the global dealmaking arena over the past year. Investors in the blank-cheque company are attracted by the promise of high returns, while targets gain an efficient route to public markets. Following the transaction’s completion, eToro will list on the Nasdaq stock exchange.

In another big-ticket move carried out by a US SPAC, Ajax I merged with online car retailer Cazoo in a deal valued at £5.1bn. Fuelled by a growth in online sales, Cazoo has become one of Europe’s fastest growing businesses, with a growth rate of more than 300% year on year. Following completion of the deal, the company will list on the New York Stock Exchange.

Intense competition for high-growth assets saw the technology sector generate the highest total deal value across all industries in H1. A sum of £36.8bn-worth of announced deals accounted for 27.7% of the market. This is an impressive performance compared to a lacklustre H1 2020, when the aggregate tech deal value of £3.4bn accounted for just 4.6% of the market. Tech deal volume, meanwhile, almost doubled year on year from 114 to 210, also the highest total across all sectors.

“It’s no surprise that tech M&A is dominating activity,” adds Albay. “Tech-enabled productivity tools were already red-hot, and then the pandemic and changes in working practices have only accelerated that trend.”

The pharma, medical & biotech (PMB) sector was also particularly active, attracting four of the ten largest H1 deals. The sector posted the second highest deal value across all industries in H1, with a total of £23.7bn-worth of transactions announced. Deal volume, meanwhile, more than doubled year on year from 29 to 75.

The largest of these saw US pharmaceutical sourcing and distribution services company AmerisourceBergen purchase the majority of Walgreens Boots Alliance’s Alliance Healthcare businesses for £4.8bn.

While overseas investors were responsible for some significant deals in H1 2021, the largest deal – National Grid’s purchase of WPD – involved two UK-based firms. The purchase  of the UK’s largest electricity business, valued at £14.2bn, highlights the pivot towards clean energy in the UK’s energy industry as companies look to strategically reposition themselves for the future.

Largely as a result of that one transaction, the energy, mining & utilities sector increased its overall market share from 2.3% to 16.4% year on year.

Deal value for both UK buyouts and exits registered all-time highs in 2020, despite the impact of the pandemic, as PE sponsors embarked on a spending spree in high-growth sectors.

“The key trends are exactly as we expected, with record buyout activity as PE firms snapped up some bargains. And while there was a slow-down in terms of PE exits, those figures still exceeded market participants expectations,” reports Albay.

International PE firms are also showing interest in UK assets that were hit hard by the pandemic but which show potential for recovery. Blackstone’s £3bn purchase of Butlin’s owner Bourne Leisure Group is one example of this trend. The deal, which values the company at around 12 times its earnings reported up until 2019, is a clear bet on the UK’s leisure industry.

The UK M&A market has shaken off the uncertainty of the past year and is clearly open for business. Appetite from international bidders remains high, particularly in high- growth industries such as technology, health and energy. The increase in deals carried out by SPACs is another positive sign of the growth potential that UK assets offer, with competition likely to increase even further.

PE funds, meanwhile, are sitting on record levels of cash – an estimated US$1.6tn globally, according to research firm Preqin – and will continue to seek out high-growth potential as we enter the second half of the year.

“There are a very large number of corporate investors and PE firms that are sitting on mountains of dry powder. They are in a strong position to invest and buy, and then there are the deals that were postponed by the onset of the pandemic that are slowly coming back to market,” says Albay. “I’m definitely expecting a continuous recovery to the end of the year, including even more focus on tech and PMB M&A.”

These positive indicators are setting the stage for an impressive H2. But, still, the future remains uncertain, and a potential new wave of COVID-19 infections could yet stifle dealmakers’ plans.