By Pat Holohan and Aileen Ramia

On the fifth day of the Chapter 11 case, newly appointed FTX CEO John Ray III has filed a first day declaration that eviscerates the company’s pre-bankruptcy management in an “unprecedented” bankruptcy situation.

At the same time, lawyers for the debtor have filed a motion to transfer a Chapter 15 case filed in New York by affiliate FTX Digital Markets Ltd to Delaware, arguing that having two different bankruptcy courts consider the cases of debtor affiliates “simply makes no sense.” Ray added that the US FTX debtors have “credible evidence” that the Bahamian government directed a transfer of hundreds of millions of dollars of FTX funds to government control and that Sam Bankman-Fried, the FTX Group’s ultimate majority owner, is working in the Bahamas to “undermine” the Chapter 11 case.

The Chapter 11 case is still in its infancy and Ray – no stranger to messes, having overseen Enron’s bankruptcy more than two decades ago – will spend the coming weeks with new independent directors and outside professionals implementing traditional accounting and cash management systems, finding and securing property of the estate, and investigating Bankman-Fried and others, among other objectives.

Bankman-Fried is already complicating the new management’s efforts, endlessly tweeting since the bankruptcy filing, alternately admitting missteps and defending his actions. Yesterday (16 November), Vox published an article with extensive Twitter direct messages between Bankman-Fried and a reporter in which the former CEO said “fuck regulators” and that “maybe [his] single biggest fuckup” was putting the company in Chapter 11, claiming that “everything would be ~70% fixed right now” if he had not.

The company and its descent

Bankman-Fried founded Hong Kong-based quantitative trading firm Alameda Research in 2017 and Bahamas-based FTX with Gary Wang in 2019. In March, the company reached a valuation of USD 32bn after raising USD 400m from investors.

FTX’s troubles started publicly on 6 November, when Changpeng Zhao, CEO of mega crypto exchange Binance, tweeted that Binance had decided to liquidate its significant stake in FTX exchange token FTT, citing “recent revelations that have come to light.” FTX users responded by withdrawing USD 6bn from the platform over three days. On 8 November, Binance seemed ready to come to FTX’s rescue, announcing that the company had signed a non-binding letter of intent to acquire FTX, but the next day, on 9 November, Binance had backed out, alleging issues at FTX “beyond our ability to help.”

That same day, the US Securities and Exchange Commission and Commodity Futures Trading Commission announced an investigation and FTX stopped processing customer withdrawals. A day later, on 10 November, Bankman-Fried published a long thread on Twitter saying that he “fucked up.”

Bankman-Fried resigned as CEO early in the morning on 11 November as FTX filed for Chapter 11 in Delaware with 133 affiliates. 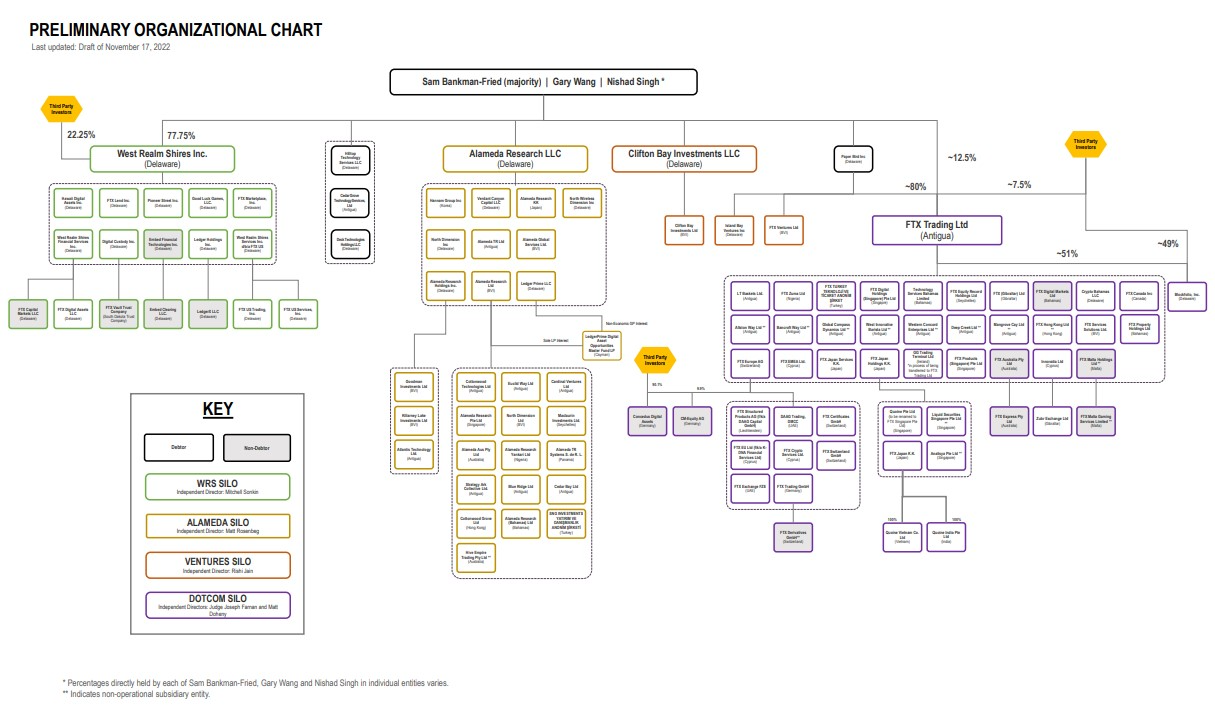 Given the towering uncertainty of the company’s financial situation, FTX’s current debt and assets are unclear. The first day declaration does provide an overview of the company’s assets and liabilities as of 30 September 2022.

From the petition date until this morning, information in the bankruptcy cases was sparse. FTX had only filed a joint administration motion and a motion to modify certain requirements governing the filing of creditor lists, providing little information that was not already public.

The first substantive information hit today with Ray’s declaration. In it, Ray does not mince words.

“Never in my career have I seen such a complete failure of corporate controls and such a complete absence of trustworthy financial information as occurred here,” Ray said. “From compromised systems integrity and faulty regulatory oversight abroad, to the concentration of control in the hands of a very small group of inexperienced, unsophisticated and potentially compromised individuals, this situation is unprecedented.”

Those failures include the lack of central management of cash; an absence of an accurate list of bank accounts and account signatories; “insufficient attention” to the creditworthiness of banking partners; lack of disbursement controls “appropriate for a business enterprise,” with employees submitting payment requests on an online chat system and supervisors responding with personalized emojis; use of an unsecured group email account with access to confidential private information; and the use of software to conceal the misuse of customer funds. 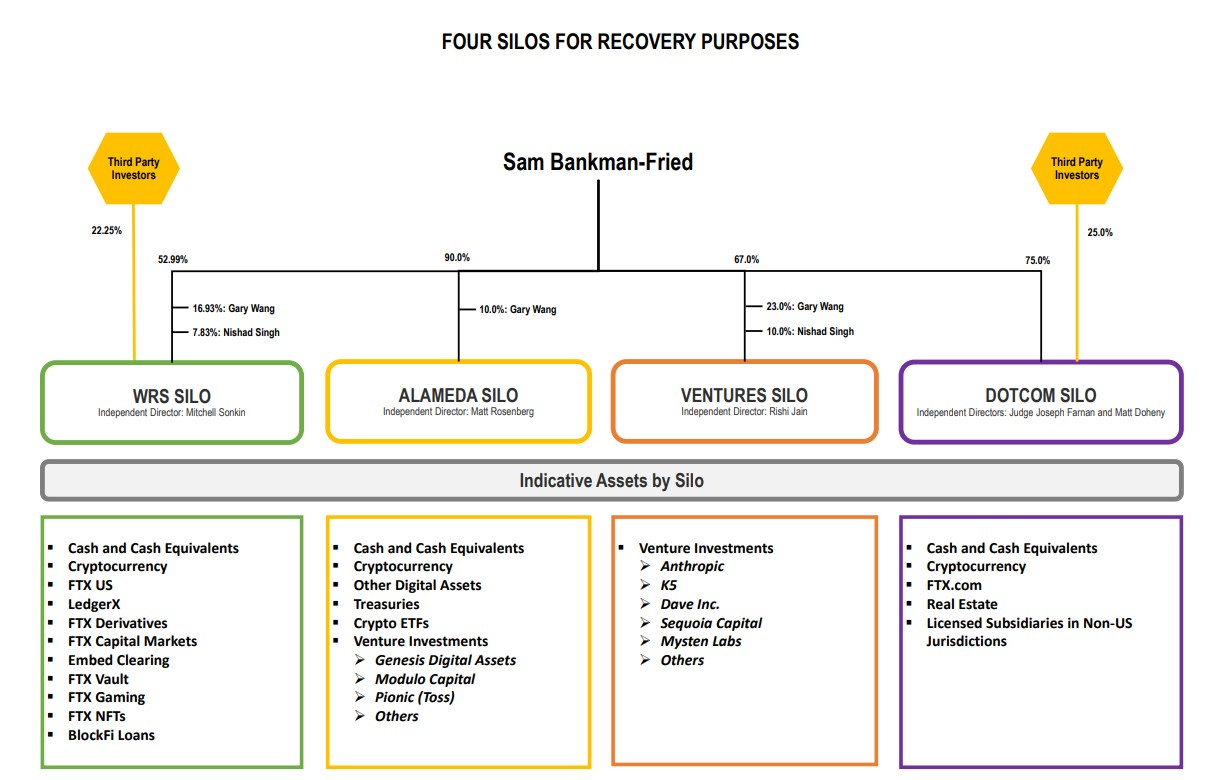 To date, the company has secured in “cold wallets” USD 740m in crypto, which Ray says is “only a fraction” of the digital assets it hopes to recover.

In the bankruptcy case, FTX will have “five core objectives,” Ray said:

To aid his efforts, Ray has appointed five independent directors at the FTX Group’s main entities:

Since filing the declaration, the company has filed a motion to extend its time to file schedules of assets and liabilities and statements of financial affairs along with a motion to enforce the automatic stay.

On 11 November, the same day as the Chapter 11 filing, the Securities Commission of the Bahamas filed a petition in the Bahamas Supreme Court for a winding up order against FTX Digital Markets. Later that day, the Bahamian court ordered the appointment of joint provisional liquidators (JPL).

The JPLs then filed a Chapter 15 petition for FTX Digital Markets in New York on 15 November, stating that they believe the company’s assets “are at serious risk of execution, attachment and other forms of stay violation.” In their emergency motion for provisional relief, the JPLs argue that without relief, US creditors will have the “unfettered ability” to take FTX Digital Markets' assets. A hearing on the emergency relief motion is scheduled for 11:30am ET today.

FTX further alleged that it has “credible evidence” that the Bahamian government itself was involved with the transfer of hundreds of millions of dollars out of FTX, previously reported to be a “hack” by unknown parties. Given those alleged actions, the appointment of the JPLs and recognition of the Chapter 15 as a foreign main proceeding “are thus in serious question.”

“It appears that the automatic stay has been flaunted, by a government actor no less,” FTX alleged in the venue transfer motion.

Other major crypto companies including Voyager Digital, Celsius Network and Three Arrows Capital, have filed for bankruptcy protection this year and FTX has been a major player in Voyager and a creditor of Celsius. Prior to FTX’s bankruptcy filing, the company had agreed to acquire the assets of Voyager for USD 1.42bn but that sale is now almost certainly off following FTX's bankruptcy filing.

At a hearing earlier this week, representatives for Voyager confirmed that they are no longer subject to a no-shop provision on the deal and will begin marketing the company's assets again. They will also move in FTX's Chapter 11 case to formally terminate the deal.

Get end-to-end coverage across asset classes and geographies

giving subscribers an unrivaled perspective and a vital competitive edge.