As an asset class, infrastructure has always been sold to investors for its ‘resilience’. Then came COVID-19, which sent shockwaves through transport investments and the wider economy. Now, another test has arrived for infrastructure investors in the wake of the pandemic, for the first time in 10 years: inflation risk.

Along with the safe returns promoted by infrastructure fund managers globally, many like to claim how the asset class is also the perfect inflationary hedge (when prices go up, so does the value of infrastructure investments). But they are not as right as they used to be.

Record levels of ‘dry powder’ – around USD 200bn recorded last year – are sitting on the books of infrastructure fund managers globally, but not all of it will be equally protected from inflation once invested.

“As an asset class, we have been waiting for inflation a long time,” says a mid-market infrastructure fund source in London. “A bit of inflation would be amazing, that is something we are all waiting for, but it’s all case by case.”

‘Core-plus infrastructure’ – a sub-strategy of the asset class that traditionally bears more market risk than, say, transport (which has had its own problems during lockdown) – will be most under the spotlight if inflation proves to be more than a ‘transitory’ phenomenon. 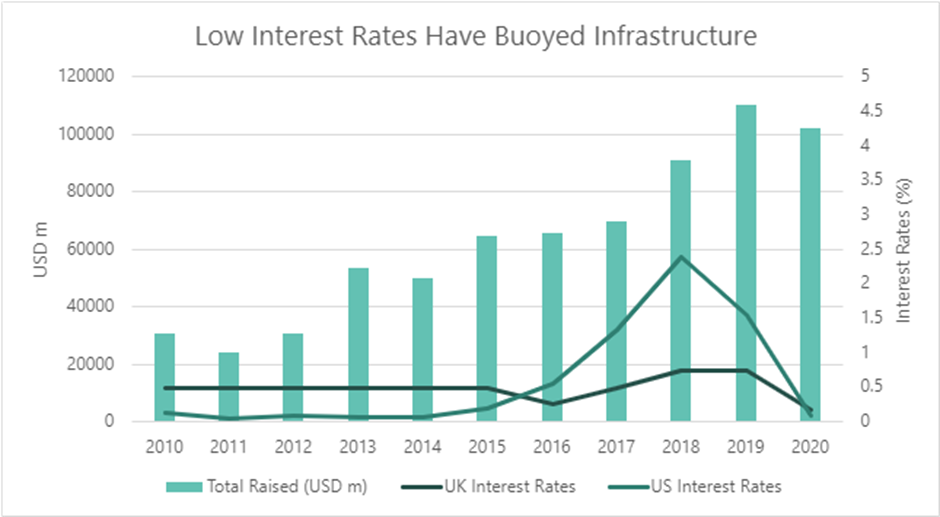 ‘Opportunistic’ or ‘value-add’ infrastructure funds, which pre-pandemic flirted with real estate and private equity-style investing, even more so.

Fund managers in this space – including some of the largest such as Global Infrastructure Partners, Macquarie and I Squared Capital – also hold large, traditional core infrastructure funds. Unlike investments in midstream gas pipelines, fibre-to-the-home or motorway service stations, for example, these core infrastructure funds typically hold index-linked government contracts. These should prove safest of all.

One infrastructure banker asked about the risk of inflation believes it could drive a new wave of interest in European and UK gas grids and water companies, where there are provisions to compensate investors for inflation through regular price reviews. Infrastructure funds that have invested heavily in government-based PPP contracts, such as Meridiam or Equitix for example, should also feel some comfort.

Fund managers raising 10- or 15-year infrastructure funds under the shadow of a rising interest rate environment need to consider this risk over the longer term.

“There’s a lot of positioning going on by funds now,” says a value-add infrastructure fund source, “[but] if you look at all the guidance from central banks, by the time we get to even 1% or 2% [interest rates], that’s another three, four years away.”

That’s just enough time for another shock to come along.

Punching above its weight - Benelux hopes to continue IPO outperformance