Squeezing the middle: a gap in the infrastructure mid-market is tempting big and small

Squeezing the middle: a gap in the infrastructure mid-market is tempting big and small

Infrastructure funds have grown big, fast. As some of them doubled in size, raising more than USD 20bn, they left a gap behind in the mid-market space.

“We've seen newer entrants in the last two or three years, but not one of the newer guys has really established themselves,” says a placement agent source. 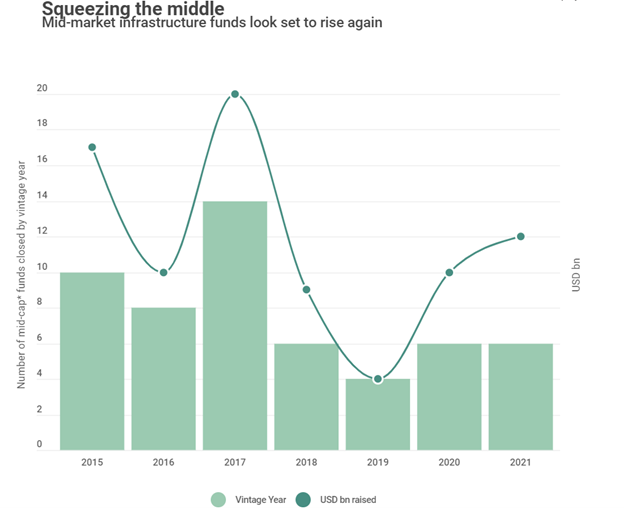 New infrastructure managers typically play in the mid-market until they are ready to scale up. Some stay for the ability to enter new markets unnoticed.

“A buy-build strategy is much easier to do if your initial investment is in the hundreds of millions, not a couple of billions,” says a fund of funds source.

With USD 100-300m equity checks, a mid-market fund spends less to build assets that can be sold for much higher prices when the time is mature.

“It tends to be the more value-add managers who started off as a bit more mid-market focused being the first mover into certain niche sectors like healthcare,” says the fund of fund source.

Major infra funds such as GIP and Brookfield, EQT, Stonepeak, and KKR are not going to lose sleep over the mid-market space.

To the extent that they’re able to make investments in the USD 200m range, they still have a foot in the door and it’s not like LPs are shunning them in favor of smaller players.

But they’re not going to pass on the potentiality of higher returns either.

Antin Infrastructure Partners is the first of the major managers to raise a dedicated mid-cap fund, closing on EUR 2.2bn in June of this year. Antin IP’s CEO and managing partner Alain Rauscher described the mid-cap segment as “increasingly underserved and… a significant opportunity”.

Without calling it “mid-market”, smaller sector-specific funds have followed a similar trajectory too.

I Squared, for example, is currently in the market with an emerging markets infrastructure fund, targeting USD 2.5bn.

With a consolidation of capital into well-known names accelerated by the COVID-19 pandemic, a continued gap in the mid-market may be filled by those same big funds, instead of newer players.