Iberia suffered considerably as the COVID-19 pandemic took hold in 2020 – but the peninsula’s outlook is already beginning to brighten. While Spain’s economy was one of the hardest hit across Europe last year, the country’s central bank has raised its 2021 growth forecast to 6.2%, as a declining number of infections coupled with a successful vaccine drive stimulate activity. Portugal is also recuperating, albeit more slowly. Its GDP is projected to increase by 3.7% in 2021 and 4.9% in 2022, according to the Organisation for Economic Co-operation and Development.

This improving outlook seems to be reassuring Iberian dealmakers. In H1 2021, the region recorded 320 deal announcements worth €31.3bn in aggregate – up 54.6% in value terms compared to H1 2020. Deal volume, meanwhile, also registered a leap, increasing by 76 deals (31%) from the same period last year.

Spain continues to attract the majority of dealmaking activity in the region, increasing its market share from 78.9% across 2020 to 93.4% in H1 of this year. Bidders targeted Spanish firms in a total of 287 deals valued at €29.2bn – more than doubling the total for H1 2020 to reach the highest half-yearly deal value in three years, while volume increased by 78 deals. As Sebastian Montoya, account executive at the iDeals Solutions Group, surmises: “Spain, right now, is witnessing a boom in terms of both M&A volumes and values.”

The largest deal announced in the region was Australian investment management company IFM Investors’ €5.1bn acquisition of a 22.7% stake in Madrid-listed Naturgy Energy Group. As well as being the largest gas distributor and third- largest electricity distributor in Spain, Naturgy is investing in many renewable energy sources including wind, solar and hydroelectricity. 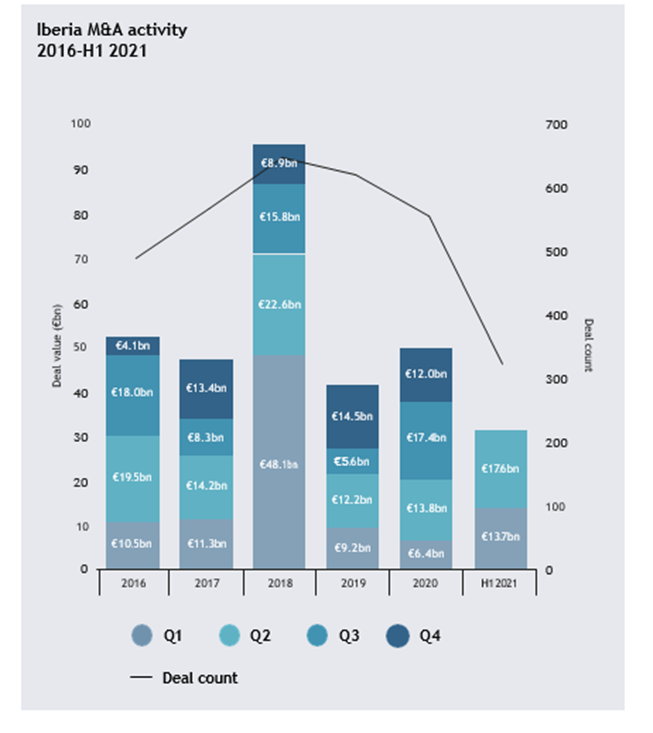 “If you look at the number of unicorns in Portugal per capita, it’s quite amazing. There are an incredible number of funding rounds, as they really want to raise money from international investors,” says Montoya. “And on the M&A side, if someone wants to buy a Spanish technology company technology, you have to pay up to 35 times EBITDA.”

Reflecting the dominance of international buyers in regional dealmaking, five of the nine largest deals of the year were conducted by bidders based outside of Europe. US PE firms were particularly active, as exemplified by Platinum Equity’s €3.5bn purchase of Spanish waste management company Urbaser.

Domestic activity also had a positive start to the year, with 172 deals announced worth €7.4bn, up 28% and 52.7%, respectively, from the same period last year. The largest domestic deal of 2021 so far saw Spanish telecoms group MásMóvil Ibercom launch a €3.5bn takeover offer for rival Euskaltel. The deal would combine Spain’s fourth and fifth largest telecoms companies, enabling them to compete with market leaders Telefonica, Vodafone and Orange.

Energy, mining & utilities generated the highest deal value across all industries. A total of €8.1bn changed hands within the sector – more than doubling H1 2020’s total of €3.9bn. As a result, the sector’s share of overall market value grew from 19.4% to 25.8% year on year. Interest in the renewables sector was a key driver of activity. Alongside the previously mentioned Naturgy deal, several other major transactions were motivated by renewables investment. One such deal was Swedish PE firm EQT Partner’s €1.2bn takeover bid for Solarpack Corporación Tecnológica , a Spanish renewable energy developer. Since its founding in 2005, Solarpack has built an estimated 1.3GW of solar plants in eight countries, including Spain, Chile and India.

“At the start of this year, it seemed like we were getting a new venture capital or PE fund focusing on renewables every week, and that’s besides the innovation funds from corporates,” says Montoya. “This is all definitely raising multiples and increasing innovation in the industry.”

Investment in Spain’s burgeoning renewables sector looks set to grow. The country is trying to reach its target of 120GW of installed renewable energy capacity by 2030, primarily wind and solar, as set out in its national integrated energy and climate plan.

Industrials & chemicals was the most targeted sector, with a total of 50 deals worth just under €7bn. The largest of those was Platinum Equity’s previously mentioned €3.5bn bid for Urbaser. Another significant deal was the Carlyle Group’s €1.4bn sale of Portuguese container producer Logoplaste to the Ontario Teachers’ Pension Plan Board. The purchase highlights the growth potential of sustainable packaging solutions as businesses and consumers look to reduce carbon emissions.

Iberian buyout volume remained relatively stable year on year, with a total of 57 transactions, up by 11 deals from the same period last year. Value saw a more noticeable uptick, with the €12.1bn-worth of deals through H1 already accounting for 90% of 2020’s annual total. International interest in energy and renewables assets was one driver behind this increase in deal value, as seen in the previously mentioned bids for Naturgy and Solarpack.

Declining COVID-19 cases and a successful vaccine programme are instilling a sense of optimism into the Iberian economies. Dealmakers appear to be taking note, with the high-growth renewables sector in particular attracting a surge in investment. Yet the future remains uncertain, and future waves of infections could see caution return to the market and inhibit dealmaking.

The premier M&A forum in Japan

Punching above its weight - Benelux hopes to continue IPO outperformance