Well-known for its strong and stable economy, the DACH region proved resilient while contending with the COVID-19 pandemic. While regional economies were, initially, hit hard by the crisis, extensive government support and a rebound in global trade are underpinning strong investment growth.

The German, Swiss and Austrian economies are all forecast to see a return to growth in 2021. Austria is expected to record the strongest growth (3.4%), followed closely by Germany (3.3%) and Switzerland (3.2%), according to the Organisation for Economic Co-operation and Development, as the easing of containment measures improves economic confidence in the region.

An improved economic outlook is translating into greater dealmaking activity. A total of €98.4bn-worth of deals were announced in H1 – up 37.2% compared to H1 2020, and the highest half-year aggregate deal value in four years. A deal count of 700, meanwhile, represents a year-on-year increase of 160 (29.6%).

Dealmaking momentum has gathered as the year has progressed. A total of €54.6bn changed hands in Q2 – the highest quarterly value since Q2 2017. As Michael Kannacher, senior account executive for DACH and Benelux at iDeals Solutions Group, puts it, “Dealmakers are expecting this dynamic to continue over the coming months as restrictions are gradually and thankfully lifted and Europe’s vaccine rollout advances.” 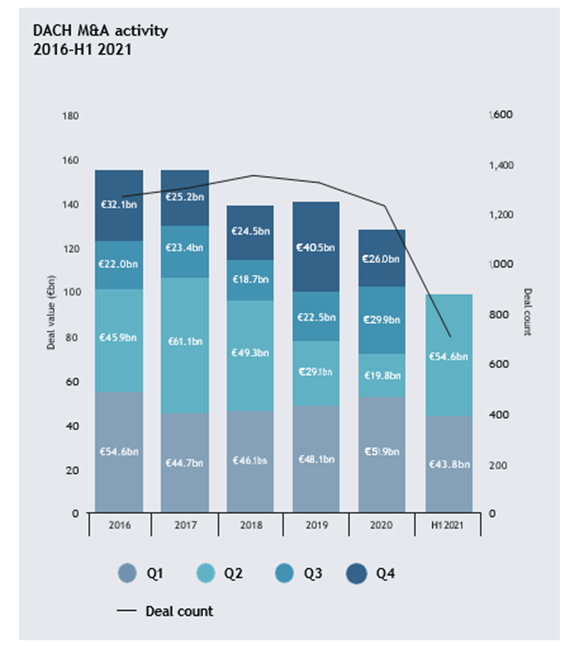 Interest from international buyers fuelled regional activity in H1. A total inbound deal value of €61.2bn was reached, the highest H1 aggregate since 2017, and already accounting for around two-thirds of 2020’s annual inbound total. There were 333 inbound deals announced in H1, up 45% from the same period last year.

US bidders were especially active in the DACH region, being involved in eight of the ten largest deals of H1. The largest of these was Telefonica’s €7.7bn sale of its subsidiary Telxius’ towers division in Europe (Spain and Germany) and in Latin America (Brazil, Peru, Chile and Argentina) to American Tower Corporation. The US company expects the newly acquired assets to generate around US$280m in property revenue throughout the remainder of 2021.

“You simply have to marvel at the unprecedented, breakneck speed of multiple projects in development at the moment,” says Kannacher. we see with the real estate market, the biggest increases and also some record breaking deals. “It’s insane how much money’s involved in some of these transactions.”

US-listed SPACs were also active in the DACH deal market in H1, reflecting the high-growth potential that investors see in the region. Among these deals was blank cheque company Montes Archimedes’ merger with Swiss biopharma company Roivant, valued at €5.2bn. Upon completion of the deal, Roivant is expected to list on the Nasdaq.

In the technology sector, US-listed SPAC Yucaipa agreed to merge with online sporting- goods retailer SIGNA Sports United in a deal valued at €2.4bn. The combination will boost the sporting retailer’s international expansion effort through acquisitions and investment in its technology platform.

Off the back of a clutch of big-ticket transactions, real estate generated the highest value across all sectors in H1 in the DACH region, with €36.1bn-worth of deals announced. US real estate investor Starwood Capital acquired Austrian office property developer CA Immo for €4.2bn. All told, these deals boosted the sector’s share of overall M&A from 6.4% in H1 2020 to 36.7% during the first six months of this year.

“There’s a lot of movement visible in the real estate and telecommunications sector right now,” says Kannacher. “The ‘new normal’ and the related demand for tech tools and communications software is playing a major role in this as well. And the pharmaceuticals sector, of course, is more popular than ever due the pandemic.”

Industrials & chemicals continued to account for the highest number of deals across all industries. A total of 195 transactions were announced within the sector in H1 – a year-on-year increase of 58 (42.3%).

The largest of these deals was the €3.9bn purchase of Swiss chemical firm Lonza Speciality Ingredients by US investors Cinven Partners and Bain Capital and Canadian pension investor Public Sector Pension Investment Board. Lonza is a provider of speciality chemicals, including critical ingredients in disinfectants, preservatives, sanitisers and personal care products.

Regional buyout activity built on a robust performance in 2020 to deliver the highest half-year volume on record, with a total of 161 transactions announced. With an aggregate of €32.4bn, deal value also posted a new high.

This impressive performance was driven by interest from international investment houses, as evinced by Starwood’s €4.2bn bid for CA Immo. Another significant buyout that occurred in H1 was US-based PE firm L Catterton’s acquisition of an 85% stake in German family-owned shoemaker Birkenstock, valued at €3.8bn.

“There is a high availability of capital and a certain investment backlog, which is leading to very high sums being paid in buyouts in some areas. It can be assumed that this development will continue for some time,” says Kannacher.

The resilience of dealmaking activity witnessed in H1 is testament to the enduring appeal of assets across the DACH region. As the economic outlook brightens – both globally and regionally – investors will continue to be drawn to the region’s stable economies.

“We’re seeing very strong pipeline generation. The deal pipelines are very well stocked,” reports Kannacher. “And with regard to COVID-19, it remains kind of a roller coaster, but even the easiest of containment measures are helping to improve economic confidence.”

The increased interest from SPACs is a clear sign of the attractiveness of assets within the region, particularly within the high- growth pharma, industrials & chemicals and technology sectors. As containment measures are eased through the remainder of 2021, dealmaking activity will stay active, and may even reach new heights.