GPs try to catch a fire: the ‘big bang’ in infrastructure allocations

GPs try to catch a fire: the ‘big bang’ in infrastructure allocations

Pension funds around the world are preparing to increase their allocations to infrastructure but the motivation is patchy, and the investment may be challenging. The financial returns published by pension funds in July and August proved that any losses they experienced in their infrastructure and real assets buckets as a result of the pandemic were either less than expected or have now returned to growth.

In Australia, the country’s super funds are on track to deliver the best annual returns in more than two decades and the performance of their infrastructure portfolios has been in, or close to, double digits. But there are other reasons, in addition to short-term financial performance, why infrastructure allocations and investment should increase among pension funds elsewhere. 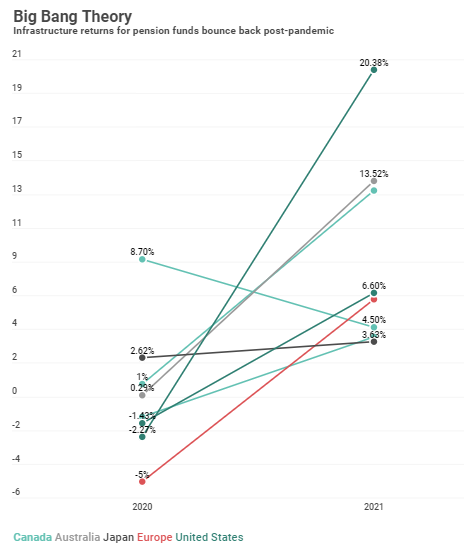 Government in the UK and Europe have pension reform in their sights and fiscal stimulus programmes are now heavily geared towards infrastructure and the energy transition. In the UK – where pooling was introduced a few years ago to puff up local government pension schemes (LGPS) to the size of their Canadian and Australian counterparts – the government wants to set up a pension infrastructure platform within Treasury and push more domestic pension funds into infrastructure.

Critics says that pension fund allocations should make financial sense on a global basis, not follow patriotic pledges. They want UK prime minister Boris Johnson’s so-called investment “big bang” to deliver improvements on the cost and complexity of investing in illiquid assets such as infrastructure. Yet many UK pension funds are moving ahead already, particularly where it improves their ESG credentials.

One UK-based pension consultant says specific renewable energy allocations are now common among UK LGPS with some discussing edging out of other asset classes to allocate up to 10% of AUM to renewable energy alone (from low single digits). Such an allocation would need to be continually met and so represents a massive opportunity for the infrastructure funds close by.

UK public pension funds are being helped in their decision-making by a heavily intermediated industry and greater transparency around investments, but also by changes in the perceived liquidity of the asset class and a booming secondary market. In other major economies – such as Japan and the US – the progress of pension funds towards increased infrastructure allocations is slower.

“The paradox is that most US pension funds would love to invest in infrastructure, but there are too few projects,” wrote Sadek Wahba, chairman and managing partner of I Squared Capital in June.

Wahba believes that if US pension funds increased their allocation to 5%, the amount of available investment could grow to USD 300bn.