Infrastructure used to be known as a private market, but it is increasingly becoming a public one. In 2019, infrastructure and private-equity (PE) investor EQT floated in Stockholm, seeing its shares gain more than 30% on the first day of trading. Today, the firm’s market capitalisation is around USD 5.71bn, about 5x higher than when it went public.

Renewable energy investor Foresight Group believes it can reach USD 10bn of assets under management in the next three years after listing in February. Eyes are now on Antin Infrastructure Partners to follow suit. But the real trend is actually in the opposite direction: taking infrastructure companies back into private hands.

Last year, a perfect storm of stock markets dips and record levels of dry powder created a take-private frenzy across listed transport and energy assets. A chill was felt among public telecoms owners too.

According to a lawyer, “the [infrastructure private] market is so hot that investors have to look for deals in places where traditionally they might not have looked”.

EQT and Ardian know this well. After acquiring US-listed telecoms giant Zayo last year in the second-largest LBO since 2008, EQT has this year been chasing Madrid-listed solar power developer and operator, Solarpack. The planned takeover could potentially make way for a series of other similar renewable energy take-privates, as public valuations for environmental, social and governance (ESG)-friendly stocks have fallen back from last year’s highs.

Infrastructure investors have an advantage in that they can price risk and growth differently – whether that be long-term toll road revenue or solar PV projects still under development. So, where will that take them next? 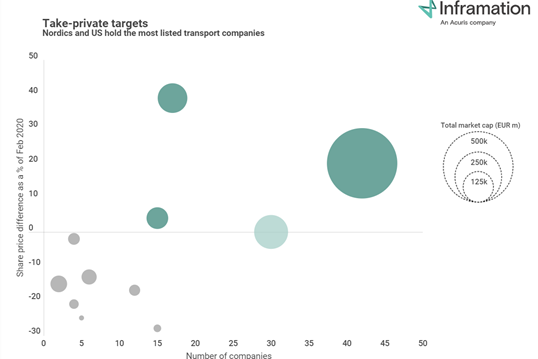 According to data compiled by Inframation earlier this year, the regions with the greatest number of potential transport take-private targets are the US and Nordic European countries, followed by France and the UK.

In particular, Norway – as a home to shipping, oil tanker and LNG carriers – has attracted the attention of infrastructure funds such as Morgan Stanley Infrastructure Partners, with its move on Hoegh LNG.

But perhaps the answer to ‘where next?’ lies beyond transport and traditional core infrastructure, where share prices have largely recovered from the shock of the pandemic.

In Australia, where ASX-listed electricity network operator Spark Infrastructure has received a bid from KKR and two Canadian pension funds, a long history of government privatisations means investors are having to search harder among listed assets.

With an energy transition away from coal-fired power in full swing, sources in the country say it is the utility sector that will be the real hotbed of de-merger activity, potentially resulting in asset portfolios coming up for sale and new take-private targets.

A bidder group including IFM, Global Infrastructure Partners and pension fund Qsuper is hoping it can take-private the country’s only listed airport operator, Sydney Airport, first. 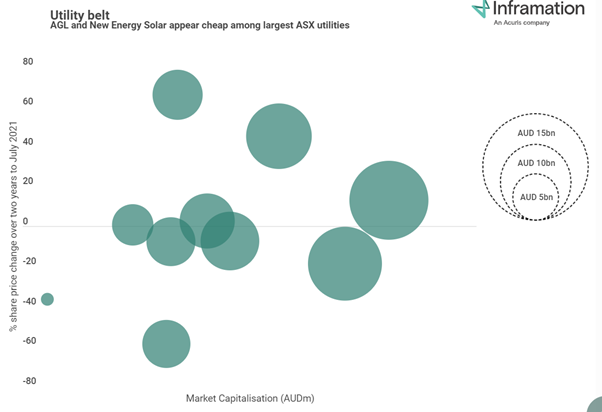