Nordic economies proved resilient amidst the COVID-19 pandemic, with GDP rates bouncing back quicker than their European peers. Sweden’s economy – the largest in  the region – is now anticipated to grow faster than expected in 2021. GDP is predicted to expand 4.7% in 2021, up from the previous figure of 3.2%. Norway’s economy, meanwhile, is forecast to rebound by 3.4% in 2021, with Denmark up by a more modest 2.8%.

Strong macroeconomic foundations, coupled with the gradual easing of COVID restrictions, are encouraging healthy M&A activity in the region. A total of 923 deals worth a combined €50bn were announced during the first half of the year – the highest half-yearly volume on record. Deal value, meanwhile, increased over five times compared to the €9.5bn recorded in H1 2020 – which saw value plummet to the lowest half-yearly value since 2009.

Sweden remained the most targeted country in the region, both in terms of value and volume, with Swedish targets attracting five of the eight largest deals announced in H1. The largest of these was real estate firm Corem Property’s €4.6bn purchase of Swedish peer Klovern Group, which involved both a Swedish bidder and seller. The merger creates one of the largest listed real estate companies in the Nordic region.

A shift towards the top-end of the market caused Sweden to reach its highest half-yearly deal value in over three years (€25.4bn) from 328 transactions. Due to renewed activity in the market, the country boosted its share in overall Nordics M&A activity from 37% last year to 50.7% in H1 2021. 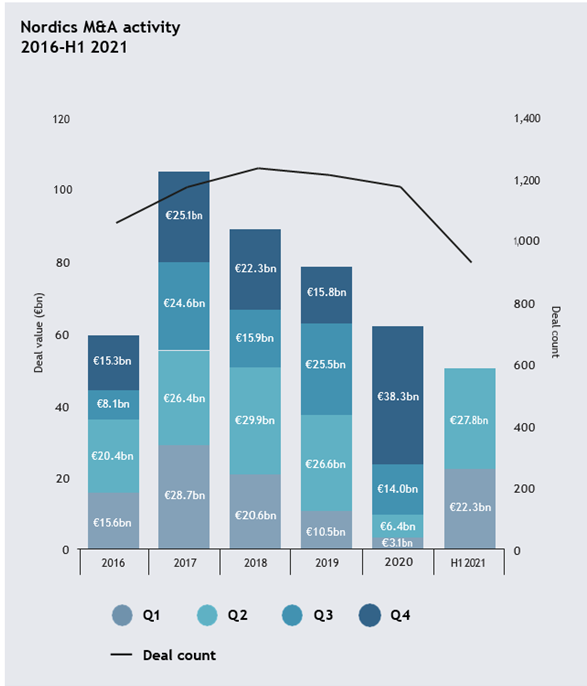 “Sweden took a more pragmatic approach to the pandemic and maintained quite high M&A levels throughout 2020,” explains Mari Nygård, head of data rooms at Admincontrol. “The Swedes have a tradition of sustaining a good business environment even through tough times, which is definitely part of what we’re seeing now."

Inbound deals back on the table

A resurgence in overseas interest was a highlight of Nordic M&A in 2021. International bidders secured 238 deals – the highest H1 volume on record – worth €31.4bn. That sum exceeded both the aggregate value of inbound deals in the preceding six months (up 18% from €26.7bn) and during the same period last year (more than ten times the €2.95bn posted in H1 2020).

Intraregional M&A makes a comeback The rebound in intraregional deals has been another positive sign for Nordic dealmaking. A total of 685 domestic transactions accounted for the highest half-yearly volume on record. Total value of
€18.6bn, meanwhile, was almost three times greater than the same period last year.

Deals such as Corem Property Group’s purchase of Swedish peer Klovern Group were behind this pick up in activity. The financial services sector also attracted some significant intraregional deals – notably Swedish Nordax Bank’s proposed takeover of Oslo-listed Norwegian Finans Holding, the owner of Bank Norwegian. If the €1.9bn purchase of the online bank goes ahead, Nordax intends for the joint company to expand into new European markets with the aim of becoming a leading pan-European niche bank.

Big-ticket deals such as the potential Nordax/ Bank Norwegian tie-up pushed financial services to second place in the sector league table for H1 2021. A total of €11.3bn-worth of deals changed hands within the sector – up from just €567m in H1 2020. As a result, the sector’s market share in overall M&A jumped from 6% to 22.5% year on year.

“The financial sector’s dominance was definitely triggered by a few very large deals, especially among the large Norwegian banks, but then we also have the deals related to Swedish companies offering digital payments solutions,” says Nygård. “Fintech is a segment in which the Nordic countries are quite advanced, so we’ll see more deals, both big and small, in that space going forward.”

Industrials & chemicals eked ahead on value terms with €12.8bn-worth of deals targeting the sector accounting for 25.6% of total market share, though it took more than four times as many deals (177) as the financial services sector (41) to reach that sum. The largest deal to take place in the industrials space saw Finnish energy company Fortum agree to sell its 50% in district heating and cooling company Stockholm Exergi to a group of European institutional investors. The transaction is thought to be worth over US$4bn.

Technology was the most active sector across the Nordic region, generating 191 deals in H1 – an increase of 90 year on year. The Nordics’ vibrant startup culture and active VC community means that a steady flow of high-growth companies are coming to market – fuelling a healthy pipeline for M&A.

“We saw a lot of tech deals, which is part  of this digital transformation that the whole world seems to be going through,” says Nygård. “On one level or another, every company has to be a tech company now, and often they’ll do that by buying technology or expertise.”

While initially hit hard by the pandemic, Nordic PE activity experienced an impressive rebound in the second half of 2020. This momentum has continued into 2021, with both buyouts and exits registering a surge in activity over the first half of the year.

Buyout activity was a particular high point, with a total of 167 transactions announced during H1 reaching the highest half-yearly figure on record. Their aggregate deal value (€10.3bn) increased more than tenfold compared to the same period last year.

“In H1 2021, we saw the expected increase in activity, because PE is growing in the Nordics in general,” reports Nygård. “Looking at the market in Norway and Sweden, if you’re a PE firm and you have exit-ready assets, then you probably would like to sell – you could get good payoffs with the kind of multiples that we’re seeing right now.”

The Nordic M&A market looks set to remain buoyant throughout the remainder of the year, as both intraregional activity and international investment continue to fuel deals. Economic recovery, both within the region and across the globe, will encourage dealmaker confidence as economies gradually recover from the shock of the COVID-19 pandemic.

Yet, the past 15 months will have taught dealmakers to be cautious, and a potential resurgence of the virus – and its implications for dealmaking – will remain at the back of their minds. While there is clearly much uncertainty on the horizon, Nordic dealmakers should feel confident as they look ahead to a brighter future.