Latin America was heavily affected by the COVID-19 crisis. Lockdowns imposed across the region directly impacted growth, with the region’s economy contracting by 9.4% in 2020, compared to 3% globally. Despite the initial devastation of the pandemic, there are signs that the economic outlook is beginning to improve: the International Monetary Fund is predicting that the region’s economy will grow by 4.1% in 2021.

Dealmaking confidence is increasing as this outlook brightens. A total of 376 deals worth US$66.9bn in aggregate were announced in H1 2021, representing an increase of 133 deals year-on-year. Meanwhile, with six months left to go this year, that total deal value already exceeds 2020’s annual sum.

“From our perspective, we’ve seen really positive trends in terms of growth,” reports Lina Giraldo, marketing and growth manager for Latin America at iDeals Solutions Group. “M&A activity is rising, and the number of IPOs is especially impressive as well.”

International dealmakers appear undeterred by the impact of the pandemic, investing record amounts in Latin America over the first half of the year.

A string of big-ticket deals carried out by foreign investors propelled inbound deal value to US$27.8bn – up more than fivefold from the figures posted in H1 2020 and the highest H1 value since 2014. Inbound deal volume has also gained momentum following a lull in 2020, with the 124 such deals announced in H1 already accounting for 63% of 2020’s annual inbound total.

US bidders were particularly active in the region, exemplified by Univision Communication’s US$4.8bn acquisition of Mexico-based Grupo Televisa’s media, content and production assets. The deal will see the two media firms merge their entertainment assets to create a Spanish- language media company, with a footprint in both the US and Mexico. 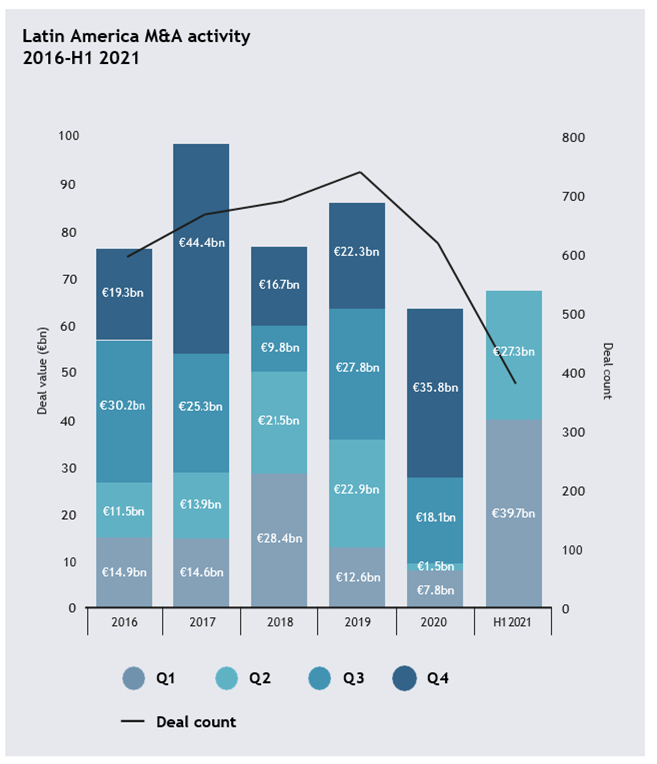 Domestic activity also saw an extremely formidable start to the year, with a total of 252 deals valued at US$39.2bn reaching both the highest H1 value and volume for several years. Tie-ups between Brazilian firms were largely responsible for this trend – four of the six largest deals of H1 involved both a Brazilian buyer and seller.

The largest of these deals – and also of H1 overall in Latin America – was Hapvida Participacoes e Investimentos’ US$9.9bn acquisition of rival Notre Dame Intermedica Participacoes. The combination of the two insurer and hospital operators will create the country’s largest hospital chain.

The financial services sector generated the highest deal value across all industries, with a total of US$25.1bn recorded. Largely due to the previously mentioned Hapvida-Notre Dame tie-up, the sector increased its share of overall M&A from 7% in H1 2020 to 37.4% in the first six months of this year.

LNG is seen as a cleaner alternative to fossil fuels such as oil and coal. The deal follows a law passed in October 2020, opening up Brazil’s natural gas distribution and LNG markets to private investors, which looks set to encourage further international interest in the sector.

In another deal that highlights the investment appeal of clean energy, US energy infrastructure company Sempra Energy acquired the remaining 26.24% stake in Mexican natural gas provider Infraestructura Energetica Nova (IEnova). Once complete, Sempra plans to combine IEnova and its LNG division to form a new unit focusing on LNG and natural gas infrastructure, as well as renewable energy generation.

Latin America’s technology start-up scene is also attracting a good deal of attention. As Giraldo puts it, “Technology is the most promising sector across all levels, with strong activity across countries, especially in Brazil, Colombia and Mexico.”

Private equity activity within the region – both buyouts and exits – remained resilient in the first half of 2021. Exit activity was a particular highlight, with a deal value of US$16bn recorded in H1 – concentrated almost entirely in Q1 – already far above all annual totals on record. Deal volume was also impressive, with a total of 31 exits reaching the highest half-yearly total on record.

Several big-ticket exits were behind this activity, including Bain Capital’s US$9.9bn  sale of Notre Dame Intermedica Participacoes within the financial services spac.

The healthy dealmaking activity witnessed in H1 2021 displays both an underlying market resilience and enduring appeal for high- growth assets. International interest remains undeterred despite the economic and social challenges the region has experienced, with the energy industry drawing particular interest from across the globe.

The surge in activity seen in H1 took place against improving economic conditions within the region, with major economies seeing a return to growth over the course of 2021. As the outlook brightens, dealmaker optimism will increase even further.

Yet challenges remain. A potential resurgence of the virus in the latter half of the year will frustrate economic recovery and could put the brakes on dealmaking activity.

While there are potential headwinds on the horizon, the stage looks set for regional dealmaking to continue its comeback during the second half of the year.