The concessionaire powering the future of electric vehicles

The concessionaire powering the future of electric vehicles

Transportation concessionaire Aleatica has developed a highway system to charge electric cars as they drive on the roadway. Infralogic’s Jonathan Carmody visited Italy to learn how this partnership with private companies, public and academic institutions could contribute to decarbonization.

In the northern Italian countryside east of Milan, executives from international transport concessionaire Aleatica recently demonstrated for the first time a new highway technology they have developed that could facilitate the mass adoption of electric vehicles.

Together with private, academic and government groups, the company has built a 1km (0.62-mile) stretch of roadway along the A35 Brebemi highway with technology installed under the tarmac and around the track that can charge specialized electric vehicles as they drive along the surface.

The circuit, which Aleatica has named the Arena del Futuro (Arena of the Future), uses Dynamic Wireless Power Transfer technology to transfer electricity from coils installed beneath the road’s surface to a copper plate fixed under an electric vehicle. 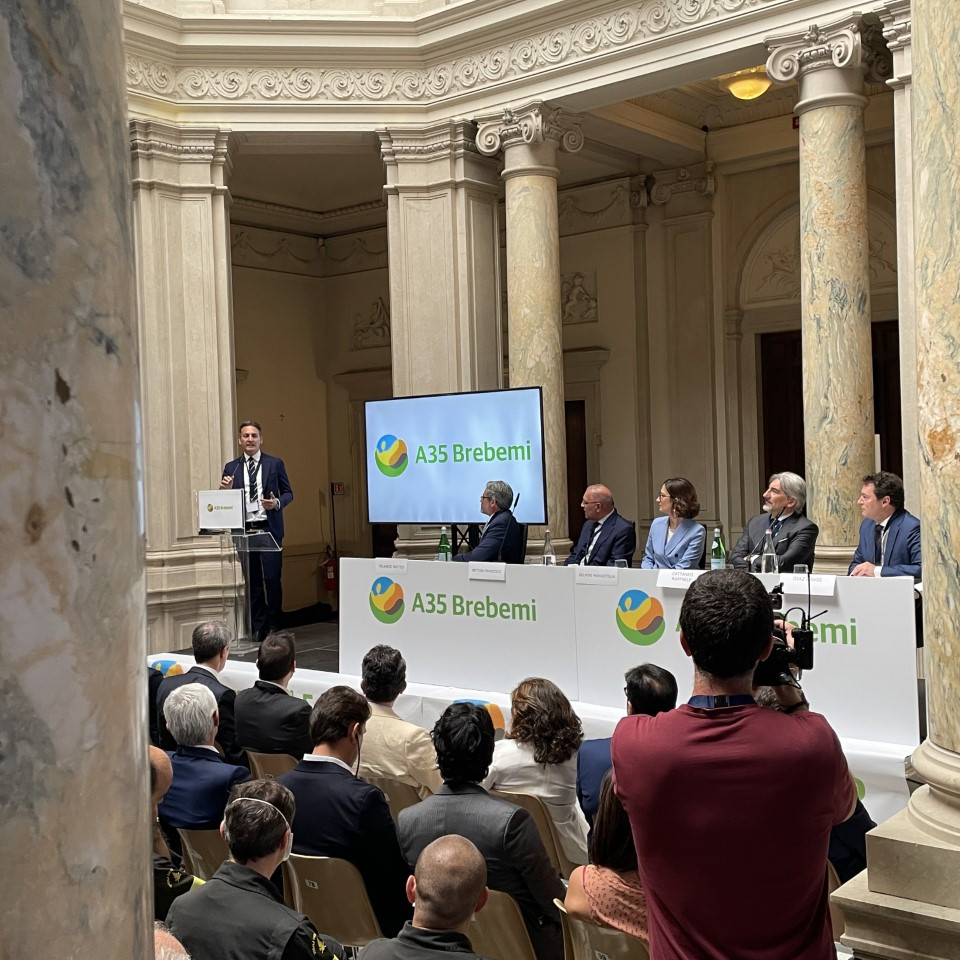 Aleatica’s recently appointed CEO and Chairman, David Díaz, tells Infralogic that this technology could provide a significant contribution to both the company’s and Italy’s decarbonization and energy transition efforts.

“This technology charges the vehicles as they pass over the systems installed beneath the road’s surface, so the project would greatly improve the autonomy of electric vehicles by enabling them to drive without stopping to charge,” he says. “This increases the distance electric vehicles can travel without the need for large batteries that these vehicles would require. Especially, for trucks and buses, which would require large batteries, this would be a great benefit.”

The test system is powered by a 1 MW power system that Díaz said would soon be fed by solar power. Panels could be installed by the side of roadways to generate the electricity to power the system and battery systems too could provide further efficiencies.

“Aleatica has a clear commitment to accomplish Europe’s net zero carbon emission objectives in our operations by 2050. We’re already buying hybrid and electric vehicles for our existing concessionaires’ operations to reduce emissions, but the adoption of the Arena del Futuro system would incentivize the shift to electric vehicles for users of our toll roads,” Díaz adds.

“Having preferential tolling schemes for electric vehicles over more polluting ones would also help to incentivize drivers to switch to EVs, but this would have to be adopted within the contractual frameworks of our existing contracts and the local regulations,” he says.

One of the issues with mass adoption of the wireless charging technology is that manufacturers would have to build electric vehicles fitted with the specific equipment, including the installation of a copper plate underneath the chassis to create the electromagnetic field with the coils installed under the roadway.

“It will take longer to Initiatives could be developed in the next few years in closed spaces like airports, ports or dedicated bus lanes to incorporate this technology,” Díaz says.

At the demonstration track, vehicle manufacturers Fiat and Iveco presented a car and a bus, respectively, that charged their batteries as they passed over the coils, spaced-out at intervals along the road.

Giuseppe Mastroviti, technical director of Brebemi, says that the system is configured so that the electromagnetic field is confined between the receiving and transmitting coils under the vehicle.

"In fact, only the presence of the vehicle can activate the coils. The activated field, being confined between the two coils, is well below regulatory limits both outside and inside the vehicle. Tests will also be carried out on internal medical equipment such as pacemakers. Induction technology is now widely used in many domestic applications and this one from DWPT can be traced back to commonly used applications such as mobile phones or induction hobs," he adds.

Alongside Aleatica and its highway concessionaire, A35 Brebemi, the consortium comprises 17 members. Those include engineering companies like Electreon, which first conceived the Dynamic Wireless Power Transfer technology in its laboratories in Israel, Stellantis, a multinational auto group that includes Italy’s Fiat and France’s PSA Group, ABB from Switzerland, Prysmian Group, an Italian electrical cable company, Impresa Pizzarotti, a construction and civil engineering company and TIM, an Italian telecoms utility providing 5G services to the project.

Local academic institutions that are contributing research to the project and analyzing the data produced at the test track include the Politecnico Milano, Roma Tre University and the Universitity of Parma.

In Israel and Sweden, other companies are doing similar tests, but the Aleatica executives said that the difference with the Arena del Futuro is that it runs on direct current, which allows for charging across longer distances.

Beside the installation on motorways and freeways the system could also be implemented in many areas of the city, as well as in and around infrastructure such as airports, according to CEO of Brebemi, Matteo Milanesi.

“You could install the system at traffic lights or in stretches where there are regular queues, or also in the ring roads where the traffic goes slow to profit from the infrastructure and give a lot of charge to your car. You can use the system in dynamic or static situations, so also in parking garages,” Milanesi says.

In the future, people will leave work, drive their cars home and plug them in to charge in more or less at the same time in the evening, so the system would also prove beneficial to avoid overloading the grid around peak hours, Milanesi adds.

There is also the possibility to exchange data using the system, to manage traffic by tracking cars driving over the system and for this the consortium has teamed up with Italian telecoms company TIM to provide 5G services to the Arena.

Aleatica currently has 20 concessions across seven countries, including two ports, one rail project and one airport.

Díaz says the company has an objective to grow and is focusing on completing the six projects in which it has relevant construction ongoing; three in Chile, one in Mexico, one in Peru and one in Colombia. Total investments are approximately EUR 3.5bn for these concessions and, of those, pending investments are about EUR 1.8bn, which should be completed in the next two years.

The company isn’t currently planning to expand through inorganic growth out of Europe and Latin America, the regions where it currently operates concessions, but is analyzing opportunities to expand the existing infrastructure to add organic growth.

“We are strategic industrial investors,” Díaz says, “so we don’t act like financial investors. In some cases, like in the Supervia Poetas in Mexico, we have 50:50 ownership, so we can consider partnerships on a case-by-case basis.”

Aleatica would be more interested in yellowfield projects, where they could add road widening or additional bypasses to existing concessions, but Díaz says pure greenfield projects wouldn’t be a perfect fit for the group.